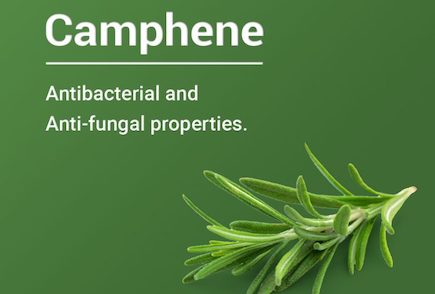 Camphene, sometimes called comphene, is one of more than 200 terpenes discovered to date in hemp and cannabis. Terpenes are aromatic molecules once thought to convey only aroma and, from an evolutionary functional perspective, to protect a plant from pests and predators. In recent years, however, much clinical research, in addition to anecdotal evidence, has revealed the medicinal efficacy of terpenes such as camphene.

Camphene conveys an aroma of earthy wood and fir needles (meaning it sometimes fools one’s olfactory sense into believing it is the similarly scented and most common terpene in cannabis, myrcene). This beneficial chemical is produced by a variety of plant species other than cannabis and hemp, including conifer, holy basil, nutmeg, and rosemary. Like other terpenes, it is commonly employed as a fragrance agent in beauty aids such as soaps, perfumes, and other topicals.

In terms of its medicinal efficacy, camphene conveys a variety of benefits, including antibacterial and anti-fungal properties, making it a potentially valuable ingredient in skincare products intended to treat conditions such as eczema and psoriasis.

Much of the research conducted on this terpene, however, has investigated its ability to lower cholesterol and triglycerides in the treatment of cardiovascular disease and coronary heart disease. It has also been shown to act as an expectorant in the treatment of coughs and throat conditions.

The Studies and More About Terpenes at: Strainprint